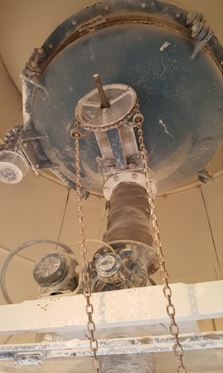 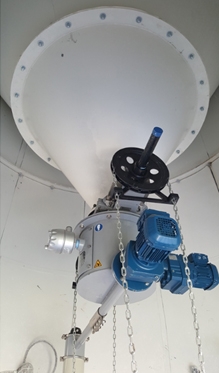 Sodimate successfully managed a hydrated lime silo retrofit in partnership with Inframark. The goal was to improve the reliability and accuracy of the installation operated by Darling Ingredients, a world leader in converting fats and proteins into a wide range of organic ingredients and specialty products for many industries. This process was designed in late 1997 to adjust the pH of the activated sludge wastewater treatment process at their byproducts rendering facility.

The purpose of this is to create lime slurry and inject it into the water that requires an increased pH. It consisted of a welded silo with all mixing equipment installed within the skirt, operating 24 hours per day, 7 days per week. The hydrated lime powder and water are simultaneously added to a mixing tank to create the lime slurry.

After almost 20 years of use, it was time to make some major improvements. Firstly, the quality of the lime slurry had to be increased with enough and constant mixing. Complementary, it was essential to get consistent flow and results from the volumetric metering of hydrated lime.

A REASON FOR CHOOSING SODIMATE WAS THE USA BASED SUPPLY AND SUPPORT. [INFRAMARK] FELT IT WAS MORE COST EFFECTIVE TO WORK WITH A USA BASED COMPANY, AS WELL AS THE BENEFITS OF MOVING TO THE MECHANICAL BIN ACTIVATOR FOR BETTER MIXING, LESS DUST IN THE SLURRY MAKEUP ROOM, AND MORE ACCURATE DOSING.

Mounted at the bottom of the silo, a vibrating bin activator acted as a discharge mechanism. It was combined with a rotary airlock as the feeder, running during the entire batching process. This could only provide a consistent feedrate if the density of the material was not affected by the vibrations. In this configuration it was difficult to guarantee an accurate and constant flow of powder. The vanes of the rotary airlock did not coat with material causing the volumetric displacement to differ.

Despite of a high speed of the mixer’s rotation into the tank, no baffles were installed. Lime slurry requires a high level of turbulence to keep the particules in suspension. Baffles are plates which are attached to the vessel wall. Without baffles, swirling and vortexing results, and very little real mixing takes place. An unbaffled tank has virtually no vertical currents and no velocity gradients, both of which are necessary for mixing. By using baffles, the flow is changed from rotary pattern to a mixing pattern.

The combination of the tank oversized, its geometry (no baffles) and the agitator size/position relative to the tank contributed to the lack of consistent mixing. Additionally, taller tanks require solids to be suspended higher, which requires more power.

The vibrating bin activator was replaced by a mechanical bin activator installed under the silo, into a carbon steel adaptation cone designed specifically for this application. This innovative and cost-effective, 3-in-1 system not only discharges the lime while preventing bridging and compaction, but it also doses the lime at a variable and adjustable feed rate. The volumetric screw feeder is more accurate and consistent than the previous rotary airlock. It operates as an auger dosing system. The pitch of the auger has a known, fixed, volume, so based on this and the rotation speed of the auger, the feedrate have consistent results.

Then, the volumetric screw feeder feeds a moisture isolation injector. Injector screws are used in place of isolation devices such as pinch valves, slide gates, rotary airlocks, and butterfly valves. The purpose of this is to protect the storage and metering equipment from the chemical reaction inside the tank by preventing the moisture and heat to go back.

On the left, the old vibrating system. On the right, Sodimate’s 3-in-1 mechanical bin activator

To promote better mixing of lime slurry, the 20-year-old slurry tank has been replaced by a HDPE baffled slurry tank with a custom-built mixer. A baffled tank made the biggest difference in the mixing performance and increased turbulence. Baffles assure that the entire batch will pass through the zone of the impeller where there is maximum agitation intensity. An agitator mixer sized specifically for the tank, vertical on its centerline, provides axial flow for every solid in suspension.

Optimizing the amount of lime delivered and the concentration reduced drastically the tank’s volume from 1000 Gal to 264 gallons. As new lime slurry is being made with a concentration of 5%, and well mixed lime slurry is displaced out of the tank to the process, through an overflow pipe, at a flowrate between 0.5 and 2.5 GPM. 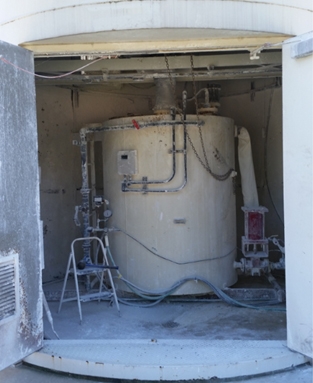 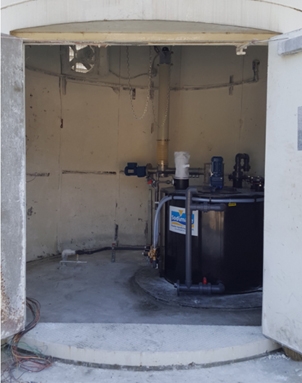 On the left, a 1,000 gallons tank placed under the rotary valve. On the right, 264 gallons tank with isolation moisture injector

Our Mechanical Arch Breaker in action: